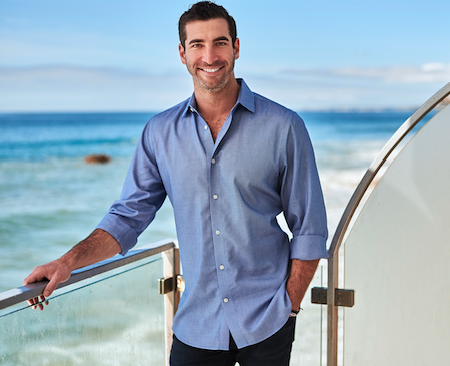 Having acquired his first investment property at the age of 21 and being recognized as the Who’s Who in Luxury Real Estate’s “Rookie of the Year” in the second year of his career, Stephen Udoff was determined to be a force to reckon with on the Los Angeles real estate scene. Today, Stephen—known as Sunset Steve on social media—has proved himself right. Beyond being a top producing associate, he has also achieved social media stardom for his In-App Marketing tactics and has grown a following of high-end clientele from his secret niche neighborhood market reports covering the real estate scene along the California coast — Malibu to Venice.

A millennial minded agent, Stephen brings 10 years of experience to Coldwell Banker Realty and was attracted to the company’s long standing reputation, it's global reach, and in house technology.. Much of the qualities that he associates with and aspires to maintain on a daily basis—honesty, intelligence, genuineness—are emulated within the agency itself.

“No matter how wealthy you are, there's one thing you can never buy back...and that’s a first impression.”

One of the qualities that elevates Stephen from the pack is his ability to leverage digital technology to market his real estate properties and personal brand. By using Snapchat as a platform to engage with the community and potential buyers, Stephen was able to convert a lead generated solely through the social app, renting out a $80,000/month property in Malibu sight unseen. His success is a testament to his entrepreneurial spirit and willingness to explore all angles of selling real estate. Stephen’s understanding of new media far surpasses his notoriety for using Snapchat, leading him to find new ways to market homes and grow his business, such as through his niche neighborhood reports.

In his spare time, Stephen is the 2020 President Elect for the Malibu Association of Realtors as well as serves as a Board of Director for TheMLS.com and the California Association of Realtors. Additionally, he was named  2018 Malibu Realtor of the Year representing the Beverly Hills and Malibu region of Southwest Los Angeles. Having grown up in Calabasas and attended college in San Diego, Stephen’s principal item on his L.A. bucket list is to go surfing and snowboarding on the same day.

Thank you for your recommendation!

Your feedback is very much appreciated. As an agent who's an expert in this local area, I bring a wealth of knowledge and expertise about buying and selling real estate here. It's not the same everywhere, so you need someone you can trust for up-to-date information. I am eager to serve you. Here are some of the things I can do for you:

Find Your Next Home
You need someone who knows this area inside and out! I can work with you to find the right home at the right price for you, including all the neighborhood amenities that matter - not to mention the essential criteria you have for your ideal home

Sell a Home
When it's time to move, you need someone who will advertise your home, show to prospective buyers, negotiate the purchase contract, arrange financing, oversee the inspections, handle all necessary paperwork and supervise the closing. I can take care of everything you need, from start to close.

Consult on Home Selling Tactics
Oftentimes buyers don't visualize living in your home the way you do. I can make your home attractive to its ideal audience - which can help you get top dollar. Things like staging the home, making repairs or minor improvements, or even simply painting the walls can be the difference between a home resting on the market and one that's sold fast.